An Act Of Clemency

Yesterday we received the incredible news that President Obama is commuting the 35-year prison sentence of Chelsea Manning. Manning has already served seven years in military prison, longer than any whistleblower in American history. She has suffered terribly.

We join Edward Snowden in applauding President Obama for doing the just and humane thing in freeing Chelsea. We also continue to hold out hope that in the next two days he’ll choose to take a similarly principled stand on behalf of Snowden. 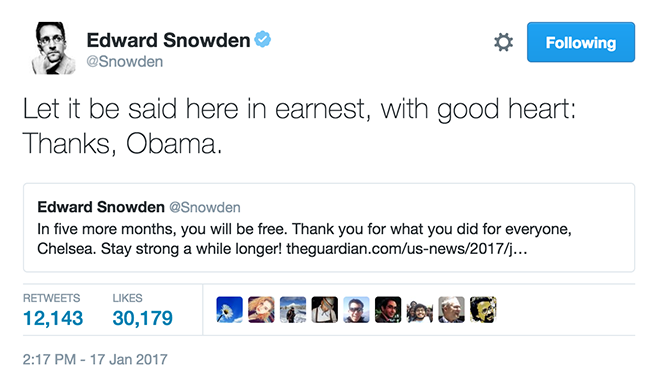 Manning’s wildly disproportionate sentence illustrates precisely why Ed can't receive a fair trial, and the logic behind her commutation applies in his case as well. Manning was convicted under the Espionage Act, under which Snowden is also charged. This forbade her from arguing in court that her disclosures served the public interest even though she revealed evidence of war crimes. (The ACLU explains here why her conviction was unconstitutional.)

The same prohibition would apply to Snowden, who would face decades in prison if tried. All the prosecution would need to prove is that he gave information to someone not authorized to receive it. Since he has never claimed otherwise, the result of such a trial would be preordained.

That is why the United Nations’ special rapporteur on freedom of expression, David Kaye, argued forcefully for Snowden’s pardon last week. He explains why trying Snowden under the Espionage Act runs counter U.S. human rights obligations:

Simply put, any prosecution of Snowden would not address what I believe should be the core question for a court: Did the public interest in the disclosures outweigh, or were they outweighed by, any demonstrated damage they did to national security? The Espionage Act does not provide a mechanism for the court to assess this question. It does not allow Snowden or any other whistleblower to mount a public interest defense – the accused violates the law simply if he or she disclosed classified information. This all-or-nothing approach does not allow a court to balance the government’s legitimate need to protect certain kinds of information with the public’s right to know.

Ahead of the commutation announcement yesterday, White House Press Secretary Josh Earnest attempted to draw a distinction between Snowden and Manning. “Chelsea Manning is somebody who went through the military criminal justice process, was exposed to due process, was found guilty, was sentenced for her crimes, and she acknowledged wrongdoing,” he said.

But Manning should never have faced 35 years in prison, and President Obama acknowledged as much by commuting her sentence. The injustice of the law is what made the president's mercy necessary in Manning’s case. The same is true for Snowden.

We have two more days. Click here to tweet at the president to ask him to do the right thing.